To, From and About Dads

A reposting of poems collected in 2011 re: fathers, on Salamander Cove :

In the palm of his hand
I tried to be perfect and I was. My two sandled feet
the width of his one great hand – my soles rooted
to his life line, mound of Venus, mound of Mars.
Held high, an acrobat stunt, or an offering to the Gods,
I was not afraid of him but perfect in his hand, face, smile -
our same curly hair -
my baby coat buttoned high with one round collar scalloping
my fat cheek. I grew and he had to use two hands
to keep me – one foot in each hand – his balance was my balance.
I grew and he used his feet on my hip bones
to suspend me above him.
I grew and his hand supported my back to push me forward.
I grew and he placed his hands on my shoulders to slow me down.

We have the same ears but it was his brown eyes that held me
brought joy, sorrow, sharpness and obsidian anger. Taller, I grew,
still trying to be approved, to be perfect, always wanting
to be held high again held that sacred again
but I know
if I stood on his hands now
I would crush him. 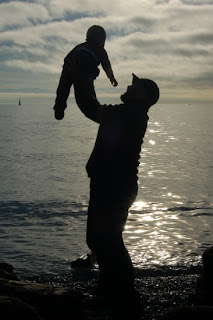 "Father and Son"
Photo by Rosemarie Hayes of LifeUnfoldsPhotography


I do not have much
of my father left:
a hat, a coat, and some gloves.

They are not him though.
They belonged to him;
they have learned his shape by rote

again. Again, that
is the key word here.
And it should not be a verb.

Published in  This Is Not About What You Think   (Fandango Virtual, 2010).

When I saw
the photo of myself
I squirmed
for only a moment
then looked straight at it.

I saw a gray man
with a crooked smile,
my father’s face looking back at me,
sporting a half-mouth grin
I’d only ever seen in one photograph
from Korea, green before first combat
in his uniform,
his whole platoon around him,
his hair short, his eyes bright,
nine years before my birth.

In the picture he’s smirking
as if he knew even then
that his son would someday come
to a similar moment of recognition
and amused resignation,
a moment of humor
before a terrifying future,
that my face
would inevitably become his
in spite of all my years of being certain
that if I just kept my head down
and did everything he never did,
I could keep such a thing
from ever happening.

I wonder if he knew
that it would take this long.

Whose Mouth Do I Speak With

I can remember my father bringing home spruce gum.
He worked in the woods and filled his pockets
with golden chunks of pitch.
For his children
he provided this special sacrament
and we'd gather at this feet, around his legs,
bumping his lunchbox, and his empty thermos rattled inside.
Our skin would stick to Daddy's gluey clothing
and we'd smell like Mumma's Pine Sol.
We had no money for store bought gum
but that's all right.
The spruce gum
was so close to chewing amber
as though in our mouths we held the eyes of Coyote
and how many other children had fathers
that placed on their innocent, anxious tongue
the blood of tree?

From Billboard in the Clouds  (Northwestern University Press, 2010);
first published by Curbstone Press, 2004.

for an instant i’m ten
and father’s still alive

My mother never forgave my father
for killing himself,
especially at such an awkward time
and in a public park,
that spring
when I was waiting to be born.
She locked his name
in her deepest cabinet
and would not let him out,
though I could hear him thumping.
When I came down from the attic
with the pastel portrait in my hand
of a long-lipped stranger
with a brave moustache
and deep brown level eyes,
she ripped it into shreds
without a single word
and slapped me hard.
In my sixty-fourth year
I can feel my cheek
still burning.

From Next to Last Things: New Poems and Essays,
Atlantic Monthly Press, 1985.

After you've been gone,
I've been flying alone back and forth
above the waters and the continents.
Both of us: me here and you there
know too well that this is a waste of time
and space.
I may be flying, looking for you
for the rest of my life
or death, and still never see you.

Nothing can be undone,
and I can't take it.
Nor I can take the fact
that every time I see my close ones, I know,
it may be the last time I see them.

Don't worry about me. While I fly,
an angel in uniform attends me,
gives me some water and bread,
and smiles to me.
She takes care of me
until it's time to get out,
get in line for the luggage
and then to disappear into crowd
which lives on the exhaust,
cyclic persistence
and canned expectations.

The latter is something
I live on myself, expectation
melting slowly into waiting
as I keep on flying
in the space given

A Thought On Father's Day

And yes
it has come to the time
when I see my father's face
in the mirror,
my squint is his
the nascent crow's feet
stretching into laugh lines
my angry brow
solicits the always surprising question
"What's wrong?"
"Why--nothing."
Didn't I always ask him the same question?
Do I find myself
praying over the New York Times
like a scholar over a sacred text?
A drink to my side
my legs crossed right to left
just like him?
Was that him the other day
that reflection in the store window
slightly hunched
arms stiff
swinging robotically
clothed in Seersucker?
I looked back
but he was gone.
Was I chasing a hallucination?
Like him
I am drawn to the sea
to the sound of breaking waves,
on the shore-
to the eternal ebb and flow
to the primal smell of death and life
to the gulls sitting shiva
on the rocks
to the purple death
of the sun each evening
its bright rebirth
from the portals of the sea's horizon.
Who is this man I see?
It is my father
and it is me.

Pinching the bridge
of my glasses
for cleaning –

Riddles for My Father

Whatever we see when awake is death;
when asleep, dreams.


He began in Colorado.
Anyplace he loved was home.
His breath scarred by cigarettes
was a rough-barked branch;
an orphaned owl hunched there,
amber eyes cradling a banked fire.

The moon was new all of his life.
The stars trafficked in secrets.

Only the earth woke in his hands
that were strong as barn-door hinges,
and he savored the give and take
of seed and harvest. His nightmare:
an upright pitchfork forgotten
deep in a mound of hay.

But always there was a horse
snorting in its damp stall,
and a saddle on the stall rail,
and not far off some mountains,
and canyons a man might live
another life in, and rivers he might
step into and out of at will....

(He’d never have heard Heraclitus
in those lines, for who in our family
would have loved such riddles
but me? I knew he’d declare them
dark and not to be trusted—so
I always held my tongue.)

Now he sleeps in the earth,
in that long dreamless house
clods drummed down on
like hooves. His face
is a new moon, and all
that was starry in him flies
like a dry beam of light
away from me. His hands
lay like broken sheaves
at his sides.

I’m awake.
And Heraclitus
is ashes in my mouth.

Dear imagination of a boy, my round idea,
you will not know the calluses on my hand,
I will not teach you to wave hello.

You came in waving goodbye, in your way,
and the sound of your own music filled
the hallway between this place and another.

Beauty is not for everyone, but you gathered
the light from the hospital into your face.
To be brutally honest, I loved you.

I tried to hold you carefully by the stem,
But you were determined to fall, and falling,
blaze up like an evening populated with cloud.

You wore your mother's womanly lips, pursed
in a pleasant smile, but your eyes you protected
from the too-bright world we learn to call home.

The music within me is quiet, but persistent.
One day, like you, I will return to being the song.
Beneath my eyelids, too, runs the sound of water.

Beneath this world, another, and another.
Who would give me a map to find you, the paper
superimposed with a constantly moving "X"?

To me, you were first a synapse, then a son.
Now grief sparks again in my dome-covered brain.
I row the underground waters, lantern in hand.

I tried to hold you carefully, but goodbye
was already on your lips, a silent prayer.
I will go on speaking to you as long as I live.