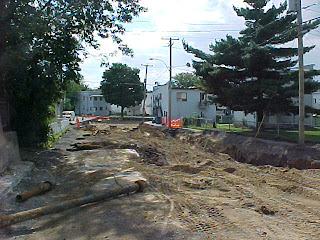 This is at the corner of our street, looking left. 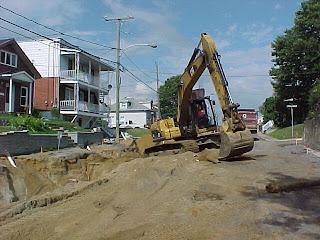 and this is looking right, up toward the bus stop. 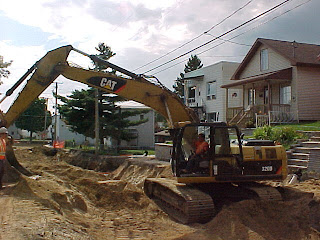 Our street is blocked and the bus must now take a detour,
like the rest of us. 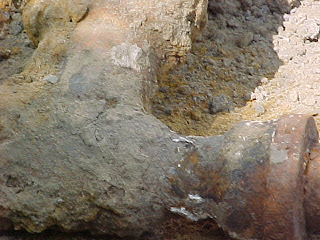 They are replacing old, eroded water pipes.
Cap-de-la-Madeleine sector is said to have the
best-tasting water in the area. 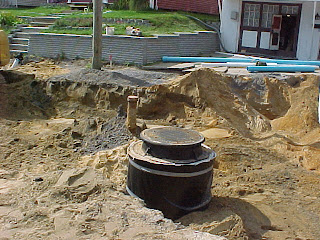 Am not sure, but I think those long, thin blue pipes over there
will be the new ones. 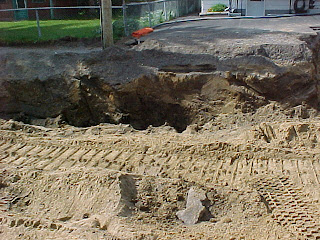 Of course they have to fill in all the huge holes and
repave the road when they're finished.  A neighbor
told me last night that it'll take several more weeks.
It's not so bad, except there's this one truck that makes this annoying peeping sound, CONSTANTLY, all day long, from 8 a.m. till after 5:00 p.m. when they stop work.  Try trying to concentrate on anything when you're at your desk in the middle of something--it's like having a bird on your shoulder peep-peep-PEEPing in your ear, nonstop.

I envy people who can block such things out:  construction noise, a TV blaring, someone yakking in the background, heavy-metal "music", a child screeching.  I knew a five-year-old Chinese girl once who was able to do that.  She was amazing.  She had the ability to concentrate on the task at hand in the midst of total, mind-scattering chaos, when all the children around her were jumping up and down and the teachers themselves distracted and frazzled.  This was years ago. The family moved back to Berlin and I lost track of them but heard later that she'd gone to Berkeley, majoring in math, I think.  I wish I knew her secret.  Is that something you're born with--or can it be learned? 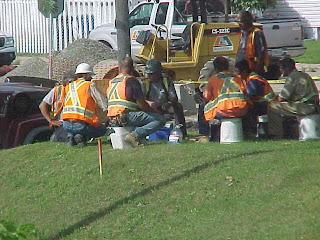 The work guys, having lunch on the hillside. 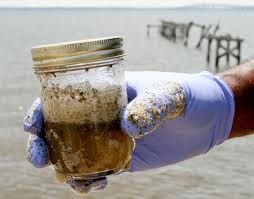 Gunk from the Gulf
DRINKING OIL

When the fishes are gone,
the blackened waters coating all,
a well-fed car can take you away …

assuming you could leave,
which of course, you can’t.

Pray for Mother Earth
and don’t forget …
to feed the car.

I received word yesterday that this reactive poem I hastily wrote back in June re: the Gulf Oil "spill" is being published at Poets for Living Waters in their Open Mic section.  (PLW is a site for "poetry action in response to the BP oil disaster in the Gulf of Mexico." The Featured Poet section on the main page is currently full, but poems are apparently continuing to be published in the Open Mic section linked at the top of the page.)

This was, on my part, a reactive poem--that is, one written entirely in reaction to something that deeply affected me, though I don't live anywhere near the Gulf.   Poems written as a "response" to something ... "in the moment", so to speak, are not often one's best work, and its rapid dispersement doesn't excuse what may only be a clumsy attempt to express muted outrage. I was actually surprised anyone would want to publish it.

And then a friend saw it on-line and emailed me, saying it reminded him of something Ilya Ehrenburg said, in 1929, about cars, and how prophetic that seemed at the time. He urged me to go read Ehrenburg's book, The Life of the Automobile, which of course is not available in translation here. But I did find a sample excerpt:

The automobile works honestly. Long before its birth, when it is still just layers of metal and piles of drawings, it diligently murders Malayan coolies and Mexican laborers. It is born in agony! It shreds flesh, blinds eyes, eats lungs, destroys minds. At last, it rolls out of the gates into the world which, before its existence, was known as “bright.” Instantly, it deprives its supposed owner of his old-fashioned peace of mind. Lilac withers, chickens and dreamers dash away in terror. The automobile laconically runs down pedestrians. It gnaws into the side of a barn or else, grinning, it flies down a slope. It can’t be blamed for anything. Its conscience is as clear as Monsieur Citroen’s conscience. It only fulfills its destiny: It is destined to wipe out the world.

"... chickens and dreamers dash away in terror ...it is destined to wipe out the world."

"Now, you have joined Ehrenburg in writing about the horrors of the automobile!" my friend added. [Neither my friend nor I own an automobile.]

Stephen King's novel "Christine" came to mind.  I haven't read the book but my mate's seen the film of the same name, based on the novel.  It's a horror film about an cocky, arrogant, killer car with a deadly past that maliciously destroys  anyone daring to want to own it.  "But it's a classic", my mate laughed when I declined to watch it.  Monster killer cars aside, should we be blaming the automobile, that little box of metal, glass and rubber that we ride around inside of every day?  James Howard Kunstler, in his 1996 book Home from Nowhere says it's not the car's fault; it's ours: "The regime of mass car use is an offshoot of our historical aversion to civility itself."

My friend unknowingly echoed this sentiment.  He ended his email lamenting: "We no longer meditate in our journeys to our friends, our lovers--and even the ride to the morgue and the cemetery is one dismal ride in an automobile!"

The poem had two focuses: specifically: what's happening in the Gulf of Mexico; and more generally, our unbreakable addiction to oil.

In the rush to get at the oil to feed our cars, accidents happen.  While blame is being passed around, it is we who end up having to stomach the result and drink the oil--our wildlife and fishes first--and because we consume the fish in those oil-infested waters, we also get to ingest the chemical poisons that have been used to push it to the bottom, also known as dispersing.  THIS is what causes people to react.

They get angry, they cry out, they shake their fists, they hurl words.  They dress them as poems and send them off, to join hundreds of others, in an impassioned response full of anguish, satire, outrage, pulling out the words that first come tumbling out of the mental arsenal.    The feelings that engender the poem are heartfelt.  I'm not sure, though, despite the fact that it's been accepted for publication, that my hurried effort constitutes merit AS a good-enough poem.  I didn't take much time with it, and perhaps that shows.

That said, I still wanted my voice added to the others, the community of writers responding, with their words, to the disaster in the Gulf of Mexico, to the continual raping of the earth, and to our insatiable greed for the very element that may in the end, as Ehrenburg cautioned,eventually "wipe us out."

This is not about what you think 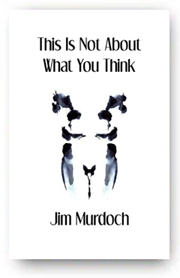 Kudos to Scottish writer/poet Jim Murdoch for the most creative (and hilarious) example of how to tell readers about one's newly published book.

I especially liked this one:


Unbrokenness
There exists within physical things
the potential to be broken.
It is only a matter of time
and of unforeseen circumstances.
These things can be repaired, replaced
or buried and forgotten about.
Nothing can ever be unbroken.
His poem "Marks", hinges on the fact that the word "mark" has a double meaning: it is a synonym for 'scar', and it also indicates a grade.  The poem, Murdoch says, "leans heavily on the fact that meanings are not rigid.  There can be resonances."

For everything you ever wanted to know about the writing of this book, click here, where the poet interviews himself.  A poet with a sense of humor, writing about Life, in all its simplicity, complexity, and invitingly observable ... thereness.  [Ouch, what awkward wording. I only meant to say the invitation to observe may not be so subtle--like life itself, sometimes it confronts, and sometimes it obscures--or as one of Murdoch's poems cautions, sometimes it disappoints. Anyway ...]

The book seems definitely worth checking out, and I will. Am just passing the word along, for anyone interested.

Email ThisBlogThis!Share to TwitterShare to FacebookShare to Pinterest
Labels: Jim Murdoch, This Is Not About What You Think 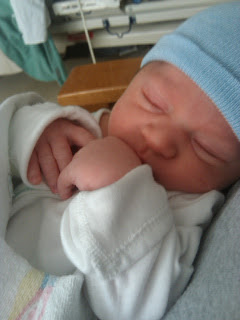 Introducing little Gabriel Calix, born a little after 1 A.M. yesterday, weighing 7 lbs. 9 oz. and 19 inches long, whom I will get to meet for the first time this autumn.

We have been celebrating ever since. A hearty welcome, little one. I can't wait to see you, hold you, learn absolutely everything about you.

~ ~ Your grammy in Canada, counting the days!!!

Email ThisBlogThis!Share to TwitterShare to FacebookShare to Pinterest
Labels: Calix has arrived

Received in the mail 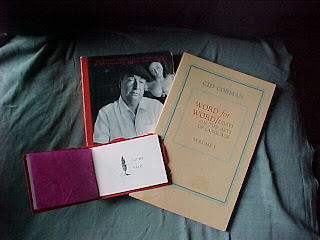 Cid Corman: Word for Word: Essays on the Arts of Language, Vol. 1. Printed January 1977 in Santa Barbara and Ann Arbor for the Black Sparrow Press by MacIntosh and Young & Edwards Brothers Inc. Design by Barbara Martin. This edition is published in paper wrappers; there are 500 hardcover trade copies; 200 hardcover copies are numbered & signed by the author; & 500 numbered copies have been handbound in boards by Earle Gray, each containing an original holograph poem by Cid Corman. Photo of Cid Corman at back, by John Levy. 169 pages.

My copy is paper bound with the pencilled notation: "LC -- 5/98 -- 14.00" on the page before the title, listing Cid's published works. I found the book on Ebay, for $3.00. It arrived shrink-wrapped, and in perfect condition.

Although in the poem Bob's referring to cows taking a "skinny path to the pasture", the line following that one describes what I intend to do mentally, i.e., "Late in the day I will walk that path with them back home". Vermont is still home, though I only lived there briefly. The words of this poem bring that all back to me--"a place of coolness", an "aisle of light" (quoting the second and last lines in the poem).

A summer with poets, arriving to visit, one packaged group of words at a time; joining others on the shelves, to become permanent guests. How great is that!!!