Reflections in a Smoking Mirror


Reflections in a Smoking Mirror

against the end
of his world 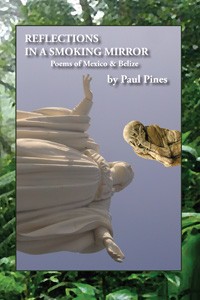 Paul Pines' newest book, Reflections in a Smoking Mirror: Poems of Mexico & Belize, arrived at a time when I was bombarded with work and so I put it aside to read when I got the chance.  Its true impact didn't manifest, however, until after I'd read the book in its entirety - and then gone back and read it again.

The power of words on a page, to tease or repel--or to invite to return for a deeper look.  The words drew me back, whispering there's more to this than one might imagine.

I'd only very recently discovered the work of Paul Pines and found that certain of his poems instantly resonated with me.  His latest publication, Reflections in a Smoking Mirror,  especially piqued my interest.

This book appealed to me on two levels:  one was its creative (almost experimental) format, i.e., you're reading a group of reflective poems about myth and conquest and journeys retraced; then  mid-book find yourself gently speed-bumped back in time.  The poet-voyager with whom you've been traveling recedes into the background and another, centuries' older voice emerges.  Presented with the translation of an ancient manuscript, you pause to examine its contents -- suddenly you're living a piece of history.  Then blip! - you're taken  back to the 21st century to rejoin the poet in Belize, with poems that accentuate the mesh of change and continuity.  New meanings emerge, the fog clears ...  you begin to really see.

Its second appeal was the insight it imparted.  Merely stating that the book proved "insightful" doesn't do justice to the unexpected expansion of consciousness that results from reflecting on these parallel journeys--the poet's as narrator/ one's own as reader, "mirroring".  The poems themselves become the vehicle that awakens (or enlarges) this consciousness.  Granted, I'm relating a very personal, subjective response here, but I am not alone in noting that this book contains more than just--as its title suggests--a compilation of poetry and reflections.

The story of how this book came about is itself quite interesting.   Imagine you're wandering by a bookstall in Mexico City in 1962 and happen upon a copy of an account by a sixteenth-century cacique (provincial governor) whose  name translated into English sounds like your own - and five years later you inadvertently find yourself in what's left of his "once proud city, now just a few huts, reading his words" and that because of these seeming coincidences you embark on a decades' long journey that will open worlds of perception you never thought possible.

As the book opens, we find Pines at the Restaurant Villa Hermosa as he orders scrambled eggs, fried tortillas and Nescafé.  He observes "La Duena/ a beauty gone to seed".  She "sits by the register in a blue dress/ features flickering/ with the memory/ of loveliness/ as she pins back her hair":


she knows that feelings become extinct
when we cease to use them,

how we change as creatures
once they are gone.

In Section One, Pines reflects on the Configurations of Conquest.  I especially liked the poem,
entitled  "Timepiece" :

a vector
nothing accounts for . . .

what else can explain
the concept of zero

as if to say
here

we cannot speak
of absence

In Section Two:  "Synchronicity,"  Pines lets the ancestors themselves speak.  It is only at the end of his journey, he writes in the preface, that their voices have reached him "in ways that have not always been apparent, except for the blood-smoke on these pages."

Through Pines' translation we get to meet his alter-ego, Nakuk Pech (baptismal name, "Pablo") , descendant of the first Conquistadors of Maxtunil, as Pech relates how they--he and his father--joined forces with the Spanish conquerors. A conquest by conversion, in Pablo's case; he watches the power of power, to subjugate, render powerless.

We went drunk on 'pinole' because everything seemed bitter and they ordered us about like masters of the earth.  For six months they rode and we followed on foot.  Many witnessed these events.  I am writing down for my children and those to come until death takes this land for its own.  Until then ...  I do not pay tribute--nor will my sons and daughters.

Pech records the events as they happened.  "I place them here like heart beats,"   he says.

Just as Pablo Pech invites readers centuries later to understand what it was like to share his particular experience, so his contemporary alter-ego, author/poet Paul Pines, invites readers to join his journey of discovery and share his reflections connecting the past and the present, what has been preserved and what forgotten.

In the third and final section of the book, we are back in the 21st century again, this time in Belize, continuing our voyage along with Pines, in a  mirror travel where "half-way down the coast/ the Coxscomb Mts bleed into the sea".

I know the integuments
of the soul are spun
from images the eye
records and nourishes
to weave us back
into the world ...

[Excerpt from the poem "Coastwise on the Fury"]

The impact of the fading threads of memory in the face of change is keenly felt, by participants and observer alike, echoed here in the poem "Dangriga":

while Carib girls pace
the streets

smile at me
by the River Front Hotel
where I wait for the truck
to Mango Creek,

smile back
and reconsider
the conquest
of the New World.

In sum, I found this book unexpectedly compelling, because it goes beyond consideration of what's remembered/what's lost -- it  gets you thinking about the depth of human resilience and spirit, and survival of myth in a  modern world "driven by time, instead of depth".  The author himself best describes, far better than I could, what readers slowly become aware of throughout:  images taking shape in the mind, "as in a polished obsidian mirror--smokey at first, then clear."  [p. 49].  A book worth reading - and then going back and reading again.