You can't order a poem like you order a taco.
Walk up to the counter, say, "I'll take two"
and expect it to be handed back to you
on a shiny plate.

Still, I like your spirit.
Anyone who says, "Here's my address,
write me a poem," deserves something in reply.
So I'll tell a secret instead:
poems hide. In the bottoms of our shoes,
they are sleeping. They are the shadows
drifting across our ceilings the moment
before we wake up. What we have to do
is live in a way that lets us find them.

Once I knew a man who gave his wife
two skunks for a valentine.
He couldn't understand why she was crying.
"I thought they had such beautiful eyes."
And he was serious. He was a serious man
who lived in a serious way. Nothing was ugly
just because the world said so. He really
liked those skunks. So, he re-invented them
as valentines and they became beautiful.
At least, to him. And the poems that had been hiding
in the eyes of skunks for centuries
crawled out and curled up at his feet.

Maybe if we re-invent whatever our lives give us
we find poems. Check your garage, the odd sock
in your drawer, the person you almost like, but not quite.
And let me know.

Trekking with the Sketchers 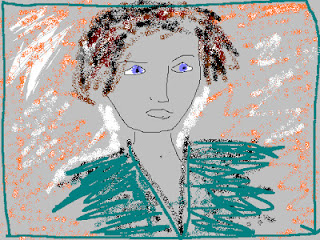 this is a drawing I made 2-3 yrs ago
experimenting with an online Paint program
a fictional character invented for a story
that never got written . . .
time to get serious & learn
how to make a proper nose
(not just a hook with dot)
& remember to include the ears next time -
color inside the lines.

fascinating so far,
the left-brain/right-brain thing -
consider the above drawing an old, hasty, "Before" rendition
to be compared, at the end of the course,
with a hopefully more realistic version.

hard work, lots of mistakes but
who knew it could be so addictive
&
fun

I was checking Ebay this morning for a particular poetry book and happened upon an auction for a 1981 Occidental College publication that contains two of then-19-year-old Barack Obama's poems.

Here are the two poems, "Pop" and "Underground", which renowned literary scholar Harold Bloom, "probably the most celebrated literary critic in the U.S." analyzed back in 2007. 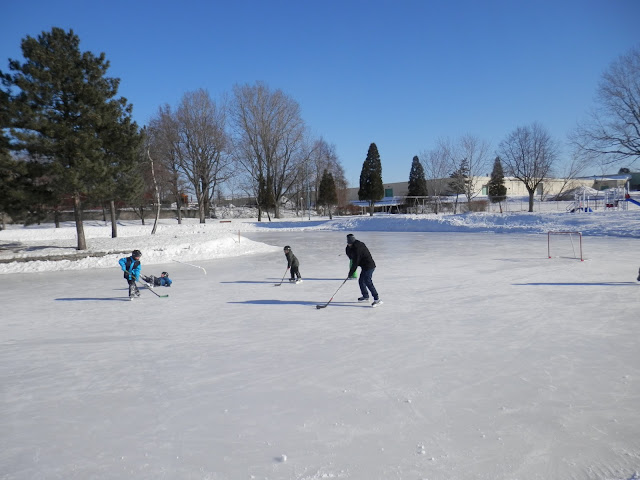 At the Parc des Chenaux the other day, some boys from the nearby elementary school,
out playing hockey with their phys. ed. instructor, Eric.   Video & photos taken with
my new Olympus pocket camera.  A freezing-cold day, but the kids didn't seem to mind.

Today it's -26 C (about -11 F) without the wind  chill factored in.   And a brilliant blue
sky overhead again.


The previous night there were about 16 skaters out skating here, the very
young to the very old.   In spring the ducks  come back to claim the pond. 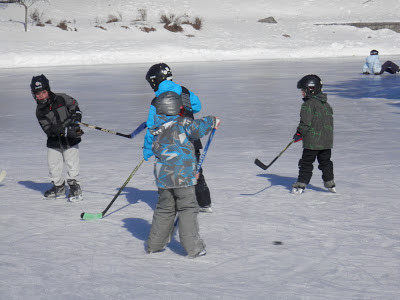 Very slippery that morning.  Quite a few tumbles.