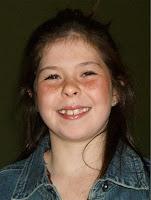 It has been one year today that Cedrika Provencher disappeared.

She was last seen at the corner of Descheneaux and Chapais Street in Trois-Rivieres by two women who said that she was looking for a small dog for an unknown person.

A Candle for Tibet

It's almost time for the Summer Olympics in Beijing. If you're going as a journalist there, you will have to be careful what you write. You may be instructed to leave your Blackberry at home. And above all, don't mention the "T" word, or you risk expulsion or arrest. Welcome to the Summer Olympics.

Some of us are going to light a candle for Tibet on August 7th, the day before the Olympic Games, because it nags at the collective conscience when a culture--this time, it's the Tibetan culture--is in the process of being systematically, and cruelly, swallowed up. 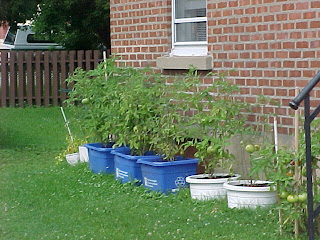 This summer, the city made it obligatory for every household to use large identical, standard-size trash and recycle bins. What to do with our old blue recycle bins?

Well some people have gone and created small container gardens out of them. What a great idea!

Sustainable urban and suburban gardening is a growing trend. So is container gardening. My next-door neighbor rents an upstairs apartment and uses her tiny front porch to grow cucumbers and sunflowers, and her back porch to grow tomatoes. Many people grow herbs in pots in their windowsills or on their patio but a lot of them are also using containers to grow small vegetable crops. 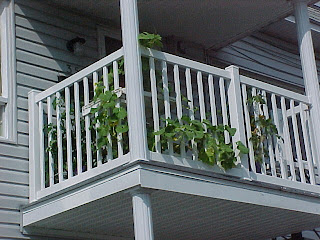 My back yard is beginning to resemble a mini farm, requiring constant weeding, pruning and working the soil. I'd decided that next summer maybe I should downsize a bit and bring back what used to be a green lawn. I hate relinquishing space now allotted to all my veggie plants, though. And so when I saw that some of my neighbors, whose space is not even a fraction of the size of my backyard, are establishing mini-gardens in their old recycle bins, I realized I can turn parts of my yard back to green grass AND keep my current veggie production by simply using earth containers!

One nice thing about container gardening is that you can easily move your portable garden-in-a-bucket around to follow the sun. You can grow carrots, beans, onions, garlic, lettuces, tomatoes, peppers, radishes and tomatoes this way. (Click here for how to make a container garden--and to grow your own tomatoes indoors this winter, click here. Don't have a yard, porch, balcony or patio? How about the roof? Check out this urban farmer's rooftop garden in Chicago (photos, video, and informative hints). 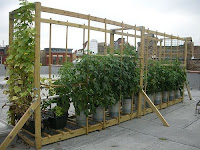 This is their roof garden -->

You hear talk about peak oil. Today I heard a backyard farmer warn about peak nitrogen. He plants crimson clover to fix nitrogen in soil that has been depleted of nutrients.

Suppose the unthinkable happens--food production becomes unstable, crops are increasingly contaminated, and commercially available foodstuffs are frequently unsafe to eat? More and more people will turn to growing their own food, even if it's only in a recycle bucket. And the saving of seeds becomes paramount.

Imagine an emergency preparedness scenario in which seeds become the new currency, where if you hope to find future food that has not been genetically modified or contaminated, a stash of organic saved seed becomes more valuable than gold.

Seed as currency, though. That gives me an idea for a short story, about a group of survivors following a global emergency, in which they're forced to sustain life by adapting and creating, out of necessity, methods both bizarre and ingenious by which to sustain life. It would not be a preachy type piece of fiction; rather one that examines the various mindsets before and after, and how each of say, eight different people react.

After a week of rain (and last week, hail!! which pock-marked many of the tomatoes and sliced and whacked the leaves of my little tree, Maurice)--finally, the sun has come out again.

A Day at the Moulin

This afternoon we went for a short drive over to Pointe-du-Lac to walk around the grounds of the Moulin Seigneurial.

This is an historic flour mill built in 1790 that still operates today. Its original machines were powered by a waterwheel that still drives the mill stones.

A wonderful place to take a nice, peaceful stroll through the woods behind the mill or along the pond and enjoy the quiet. There's a little garden at the side of the mill, just bursting with cosmos (my favorite flower) and other colorful blossoms.

A short drive up the hill will take you to Boulangerie Guay (home of the famous baked beans). Or you can swing down to the little beach along Lac St-Pierre and watch the windsurfers, occasional barge drifting by, and of course, the ever-present, wonderful, swooping seagulls.

Right now at the Moulin, there's an interesting outdoor art exhibit by Celine Noury, titled "Imagin'aire". (You can read a review of this exhibit (en francais) here.) This exhibit ends September 30. We just happened upon it by accident. (That is, we just went there to walk around a bit in the woods and enjoy nature. What an unexpected, delightful surprise!)

My favorite wood sculpture was in a group called "Les Voyagers" (the Travelers). (See the last photo at the bottom.)

Can't get there in person? Click here to take a virtual tour. 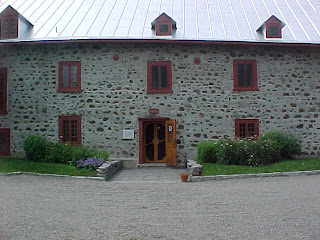 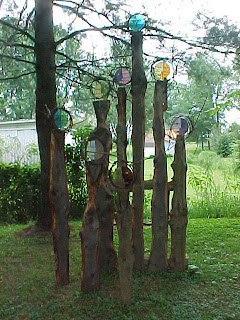 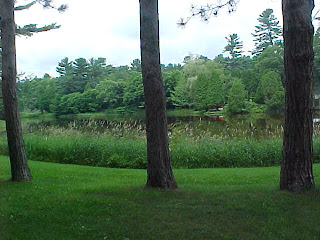 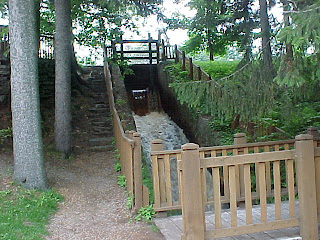 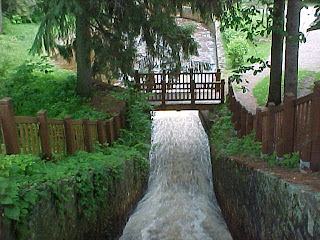 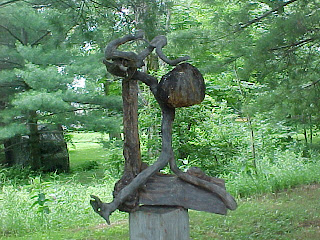 The There and the Here

When you reside in one country
but your heart lives in another…
the Here becomes the new familiar.
What may have begun as reluctant acquiescence
turns to habit
as the Now slowly compartmentalizes
all former knowns.

Sometimes, lured by the pull of nostalgia,
you return to the There,
only to be met with a chill of alienation
wrought by time
and changes,
prompting you to question:
Where is my home?

You vacillate between the There
and the Here,
between the Then
and the Now,
struggling to hold a life remembered
against the blistering winds of change
that take you sometimes
where you may have never
intended
to go.

It's That Time Again

... to celebrate what's the best--and try to fix what's the worst--of America.

Bruce Springsteen, live at the Memorial Colliseum in LA, singing "This Land is Your Land."