Today's "Day of Action" is to call attention to the fact that this fast-tracked free trade corporate power grab by multinational corporations, will:


-  Allow corporations to sue governments if a country's laws interfere
with their corporate profits;

-  Further hijack  power with regard to food safety, the environment,
workers rights and access to health care;

- Three judges on the tribunal appointed by the corporations themselves
would have authority to overrule laws of the United States.


So, those are just a few of the reasons many people are upset and want to be heard, since it will affect all of us.

This is what Democracy looks like. (While we still can.)

"Where have all the flowers gone?" 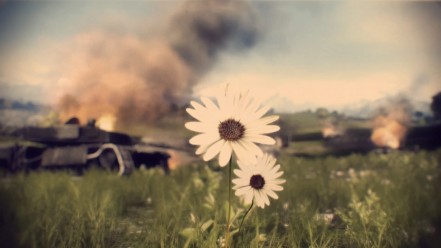 I don't have a hammer
I can't find a bell
and I can't sing
for beans, heaven or hell


In this video, "Pete Seeger performs "This Land is Your Land" with Farm Aid board artists John Mellencamp, Willie Nelson, Dave Matthews and Neil Young live at the Farm Aid concert in Saratoga Springs, NY on September 21, 2013. Farm Aid was started by Willie Nelson, Neil Young and John Mellencamp in 1985 to keep family farmers on the land and has worked since then to make sure everyone has access to good food from family farmers."

About mid-way in the video he tells the audience he has a verse we've never heard before:

New York is my home
New York is your home
From the upstate mountains
Down to the ocean foam.
With all kinds of people
Yes, we're polychrome!
New York was meant to be frack-free.


(On October 21, 2011, at age 92, Pete Seeger was part of a solidarity march with Occupy Wall Street to Columbus Circle in New York City.  In January last year he joined over a thousand anti-fracking protestors to plead with Governor Cuomo not to allow fracking in New York State.)

Seeger was still as active as ever, out chopping wood ten days prior to his death

Email ThisBlogThis!Share to TwitterShare to FacebookShare to Pinterest
Labels: Pete Seeger, Where have all the flowers gone?

Today is my mother's birthday.  Had she lived she would have been 94.    On this day every year my sisters and I remind each other it's her birthday and we speak not just of her but to her.  Happy birthday, Mom!

Coincidentally the first email I received today was from another person celebrating the birthday of a departed one today--poet Robert Peake, whose poems continue to speak of and to his deceased son, James, who would have been eight years old today.

I first met Robert online, when I stumbled on his website and found a poem I really loved and asked permission to share it.  Four years ago I was gathering poems to post in a then-upcoming issue of Salamander Cove, which is not usually theme-based, but I'd decided to try something a bit different that time.  I wasn't sure how readers would react.  The theme was loss of a child, through miscarriage, stillbirth, illness, suicide,  accident or war, where these particular beings' not being there anymore--their strongly felt absence--profoundly affected these particular eight poets.  Six of them wrote about their own loss, two on the loss of others' children.

The poems held a special meaning for me as well.  I hesitated, wondering if it might seem. . .  well, too depressing to group together this collective grief and lay them out, one by one. I went ahead anyway.  The poems were just so compelling.  The poets themselves were supportive of the idea.  Occasionally I'd find that a reader had shared the "Loss" posting with a grief support group, that some readers found comfort in the company of these poet-parents and could relate to their experiences.  Thank you again, Chris Agee, Anna Ross, Dave Jarecki, Laure-Anne Bosselaar, Jim Murdock, Robert Peake, Charles Bernstein and Jamie Dedes, for allowing me to share your poems back then

I'd like to put a plug in here today for Robert's chapbook published last year titled The Silence Teacher.   I knew the background, as it were, and some of the poems were already familiar to me, but what stunned me was the continuity of the sheer Poetry of his poems.  There is poetry and there is Poetry.  It was not just the retelling of a deeply personal journey, it was a realization of  the craft and elegance and care with which each word was chosen..

Don't just believe me - here are some other reviews.

Birthday dates remind us that our beloved departeds are not here anymore.  And yet they still are.

Email ThisBlogThis!Share to TwitterShare to FacebookShare to Pinterest
Labels: Guy and his sister 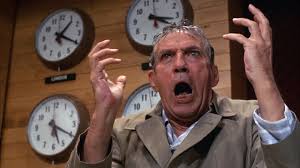 From the Cultural Slagheap, words of reason and rage from Eric Waggoner, a former West Virginan, about the recent contamination  of the drinking water for nine West Virginia counties by a leak from a chemical company, whose tanks had not been inspected for over 20 years.  There was no plan for what to do if one of the containment tanks happened to be breached.  Kind of an Alfred E. Newman  attitude. ("What? Me Worry?")

The spill dumped 7,500 gallons of 4-methylcyclohexane methanol (MCHM) into the Elk River, a mile and a half upstream from the intake pipes for West Virginia-American Water, a company that serves nine counties.

As a result, 300,000 residents were told they could not drink, cook with, bathe in, or wash their clothing in the water. FEMA trucked bottled water in. Schools were closed and some businesses had to temporarily close down.   Six days, forbidden to use their tap water.  Pregnant women are still being advised not to drink it.

"This was not the rational anger one encounters in response to a specific wrong, nor even the righteous anger that comes from an articulate reaction to years of systematic mistreatment.  This was blind animal rage, and it filled my body to the limits of my skin," writes Waggoner.

"It’s essential for state and federal governments to consult with scientists—actual, real scientists, in spite of this area’s long and fierce tradition of anti-intellectualism when it comes to public policy—and provide a regulatory apparatus for maintaining safety standards and making sure things are up to code, and that there’s a protocol in place for when systems fail.  That’s what a society does to protect the people who live in it.  Or the people who live in it will—should, anyway—naturally come to the conclusion that their health and safety mean zero in the calculus of industry and politics."

Waggoner's blog posting has since been going viral.  You can read it in its entirety here.  Judging by the overwhelming response in the comments section, he is not alone in his reaction.   Now if only the Powers-That-Be would take note and stop allowing corporations to voluntarily regulate themselves,  answering to no one.  Instead of spending taxpayer money on increased surveillance of every citizen, how about hiring more inspectors to ensure the safety of the nation's water, food, and environment?

The U.S. Chemical Safety Board has a $10.55 million annual budget,  but "is stretched thin and must decide which of the 200 or so 'high-consequence' accidents that take place in the United States each year merit its attention."  They've made innumerable proposals, according to a spokesman, asking for additional investigators, "for years".   Congress, they say, "has been unwilling to come up with more money."[1]

Not so for the "visitor control center" ($10.55 million) and security at the NSA's new $2 billion Utah Data Center (over $10 million). [2]   Apparently, this massive new complex to manage and store data for the intelligence community had zero problem being funded.   It even has its own water treatment center.  Sounds like the water's very well managed there.

As to corporations that ignore regulations, lobby to have them reduced or removed entirely, when a major mishap occurs for which they are responsible,  they simply apologize and pay a fine. Where is the justice?  The United States Supreme Court has declared that a corporation may be recognized as an individual in the eyes of the law.[3]  Why are these 'corporate persons' not being held accountable?

Something's changing, though.  People are not just taking it anymore--this being lied to, surveilled, having their health compromised, unable to get anyone to listen long after the news cameras and cleanup crews have departed and the illness they've been left with is not going away.  Ask the victims of BP's horrendous oil spill in the Gulf three and a half years ago, how their health is today. [4]

Doctors in Pennsylvania  are forbidden to share information with patients exposed to toxic fracking solution because those chemicals are "proprietary", meaning they must remain secret.  This law that became effective in 2012 benefits the corporations, lets them off the hook, you might say.  In effect, Sorry,  people, because of this gag order, doctors won't be able to discuss how many other patients in your region suffer from the same symptoms, which began appearing right after the frackers came, because somebody might determine it's a cluster - why, then you all might  get together and file a class action lawsuit, no we can't have that, no indeed.

Anyway, people are mad as hell, and they're speaking out.  The more that do, the louder it'll get.   One day it will become impossible to ignore.  Maybe then real change will come.  Because it must.  How long can one keep holding one's breath?

I wonder
how it would be here with you,
where the wind
that has shaken off its dust in low valleys
touches one cleanly,
as with a new-washed hand,
and pain
is as the remote hunger of droning things,
and anger
but a little silence
sinking into the great silence.

Thanks for the memories.

The Everly Brothers Reunion Concert, Live at the Royal Albert Hall in London, 1983

Through a Glass, Waterly 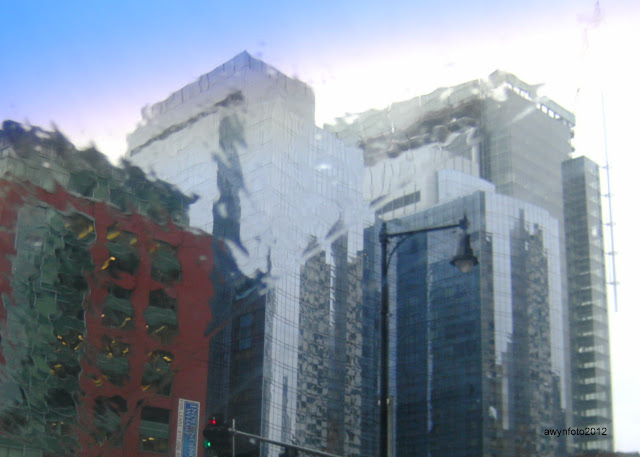 When watercoloring, the colors sometimes run.
When rainwater splots 'cross your windshield the view gets skewed,
lines blurrr /wigggle/ waver, form smudges.
The rust-colored edifice could be a watercolor,
(were this a watercolor) -
its stalwart companions  a shimmery mirror.
I'd call it
"Concrete Glass Towers
Contemplating Themselves".

*Photo taken in downtown Boston en route to South Station, 2012
Posted by awyn at 11:46 AM

where, in Miles David Moore's The Boy Who Killed Saddam Hussein, a band teacher is accused,
by one of his students, of being a terrorist . . . and 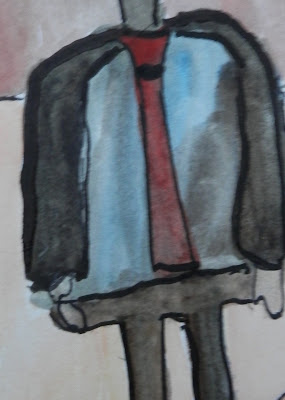 into the new year
head who knows where
feet first