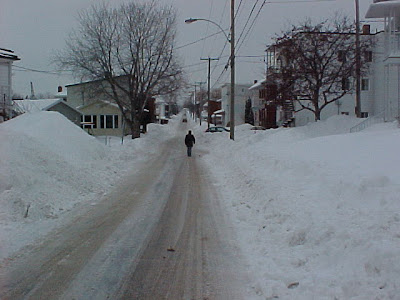 You barely meet anyone on the road these cold mornings,
someone out shoveling snow or walking their dog,
or walkers, like the elderly gentleman round the corner,
limping along for his daily constitutional,
twice around the block,
"pour la santé".

We pass, exchange nods, & hurry along,
braced for the wintry blast that slices by,
whipping into our faces and bones,
a subtle reminder that physical vulnerability
to these absolutely predictable elements,
won't necessarily deter us.

What I like most, though, is the quiet. The absence of distraction.
Everything is as it should be.

I know I said yesterday that I was getting sick of it--the snow, the cold, the long, bleak winter afternoons. Last week we had a reprieve of sorts and it turned warmer and I actually saw a patch of mud--and in the lot behind the school, a bit of grass (not green--it was brown and still frozen, but at least some "earth" was visible besides nothing but snow, snow, and more snow).

I AM anxious for Spring, ready for the flowers and little perennial herbs to begin inching their way out of the ground and start blooming again in my garden. It's also true that I absolutely cannot imagine living anywhere where it doesn't ever snow. Go figure. 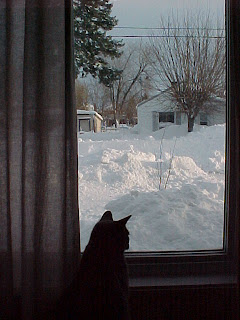 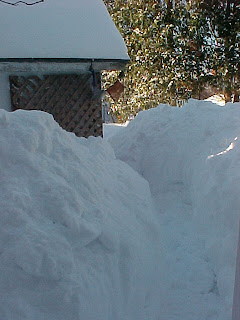 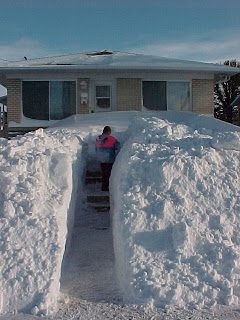 Ah, Spring! Will it ever get here?

This is what it looks like now here in sector Cap-de-la-Madeleine.

Yes, it snowed again. And we are running out of places to stack the darn stuff. The "mound" outside my front window, at its highest point, is over six feet high.

Truly, I have never seen so much snow in my life! It is EVERYWHERE.

This is the view from my back door and that's my garden shed, at the moment buried. (Good thing we took out all the snow shovels before all this started!)

What happens is, the plows come around in the wee hours of the morning and do the roads, but in the process leave a trail which amounts to yet another shoveling job just so you can get your car out.

Everyone's a bit weary of it now, longing for Spring. Me, too--and I'm already assembling my seed packets to start the indoor planting on March 19th, which is when most people here start theirs. Last year I think it was mid-June before it was safe to put the tomato plants directly into the earth. There were still little clumps of snow around in May.

Last night, bored with television but finding it a bit too early to go to sleep, I looked around for something to read. I grabbed a 20-year-old copy of Paul Theroux’s Riding the Iron Rooster, an account of his travels by train through China.

"How does Baudelaire put it? The real travelers are those who leave for the sake of leaving," he writes. How many of us go on a trip, not so much to go TO somewhere, but to briefly get away FROM somewhere?

Now what possessed me, after having gotten only to page seven, to abruptly skip to the last page to read the final sentence? ("When I left Tibet some days later I lifted my eyes to the mountains and clasped my hands and invented a clumsy prayer that went: Please let me come back.") Ah, Tibet, whose culture is slowly being China-ized. So he eventually makes it to Tibet!

Aquarians, it is said, don’t particularly like following rules. (Like the unwritten one that says you should maybe wait until you actually read to the end of a book to find out how it ends.) Some people get really upset if you tell them the ending of a story (or film) before they've had a chance to read (or see) it. These are also often people who follow instructions to the letter. Aquarians--at least the ones I've known--don't fit easily into this category, myself included. If the laundry detergent instructions say "1 cupful", I put in 1-1/4. If the cookie recipe calls for, say, 1 cup of sugar, I add only 3/4 of a cup. I don't know why this is... it just is.

I also don't much like having to stand in roped "lines" (like those in banks or bureaucratic government offices) where you're lined up in maze-like "people partitions"--they remind me of the stalls they use for livestock. I understand the need for order, but that's like saying they don't trust people who stand randomly around or are in "groups"--they feel compelled to separate and line them up, one behind another, so they can see everybody individually. It's not the method so much as the mindframe that grates.

Of course, people who balk at conformity have no business raising an eyebrow at other non-conformists--for example, at someone who wears socks of two different colors, ha ha. But I digress.

I like reading travelogues. My absolute favorite is Rebecca West’s Black Lamb and Grey Falcon, a deliciously detailed and highly interesting 1,181-page book about her travels in the 1930s through the former Yugoslavia. I concur with a fellow blogger from Germany, that this book is "less a timeless guide to Yugoslavia - but more of a portrait of the author’s soul and of European thinking on the brink of war," and like Balkan history, "digressive and meandering." Besides being a "vast, ambitious, brilliant" book, it contains "a great flood of ideas, at times completely undisturbed by factual limitations." (You can read his complete review here. (This blogger's other posts, by the way, are generally quite interesting and worth reading.)

How wonderful to be able to go to faraway places I’ll likely never get to visit, through the eyes of articulate, reflective writers who not only manage to take me there with their words, but do it in such a way that their observations and reflections immediately resonate. What greater tribute to a writer, eh?

Thank you, Paul and Rebecca.