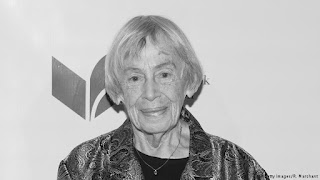 "I think that hard times are coming, when we will be wanting to hear the voices of writers who can see alternatives to how we live now, and can see through our fear-stricken society and its obsessive technologies to other ways of being, and even imagine some real grounds for hope.

We will need writers who can remember freedom; poets; visionaries; the realists of a larger reality.

Right now I think we need writers who know the difference between the production of a commodity and the practice of an art."

Le Guin's words challenge and inspire us to be more mindful of the way we practice our art--and its potential role in suggesting the possibility of something more, something better than the reality one is presented with.  John Lennon is an example of a voice that asked us to imagine a world without war.  (He also asked us to imagine a world without religion, borders, or greed.  Then, as now, however, not everyone wants to change, or to be one with the "Other" in today's or tomorrow's reality.)

Still, I like her conviction that writers, poets and artists offering creative alternatives to the status quo need to have their voices heard.  Writers can create stories that transcend the reality we're given, to imagine a different, better one.  Poets could give us words that profoundly resonate, leading to life-changing insights.  And artists can make us see, instantly, what words often struggle to say, and can't.

In all this, it seems to me, it's less important whose voice is doing the voicing than the meaning of the message conveyed. That messages can be misinterpreted (or go unheard) does not mean that some aren't or that their impact is unfelt.  Grounds for hope.

Thank you, Ursula Le Guin, for your words and the reflections that resulted. R.I.P.


No Possum, No Sop, No Taters

He is not here, the old sun,
As absent as if we were asleep.

The field is frozen. The leaves are dry.
Bad is final in this light.

In this bleak air the broken stalks
Have arms without hands. They have trunks

Without legs or, for that, without heads.
They have heads in which a captive cry

Is merely the moving of a tongue.
Snow sparkles like eyesight falling to earth,

Like seeing fallen brightly away.
The leaves hop, scraping on the ground.

It is deep January. The sky is hard.
The stalks are firmly rooted in ice.

It is in this solitude, a syllable,
Out of these gawky flitterings,

Intones its single emptiness,
The savagest hollow of winter sound.

It is here, in this bad, that we reach
The last purity of the knowledge of good.

The crow looks rusty as he rises up.
Bright is the malice in his eye . . .

He joins him there for company,
But at a distance, in another tree.


What struck me about this Wallace Stevens poem is the way certain words leap out as
metaphors for the new now, in this age of excessive lack, "here, in this bad" , where an emperor's utterings erupt as hollow savageness inspiring horror, or "gawky flitterings" intoning emptiness.

Like silent sentinels we watch, and wait, for the light to shine again.