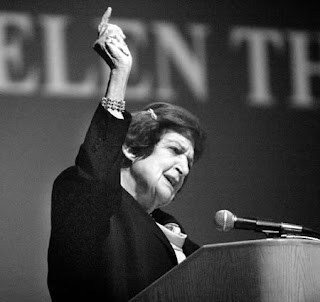 The Washington Post called her the "feisty scourge of presidents".  She was considered "tough", "outspoken", "abrasive", asking questions others couldn't--or wouldn't.  Questions a bit too probing for some, perhaps.  During the Bush administration she was summarily moved from her usual place in the front row, all the way to the back. A demotion (de-motioned).  You can't really see hands raised way, way in the back, or maybe even hear the question.  An effective strategy to pretend not see or hear someone.  Mission accomplished.

Today, criticism of your government's leader, policy, or behavior could get you blacklisted, or at the very least, "watched".  It depends on how you phrase it, in which venue, and the level of your probing or persistence.  Thinking a thing is one thing.  But blatently, passionately stating it or pursuing the truth of it (or worse, mediatizing your pursuit of an inquiry), can cost you your career as a journalist.

Press conferences don't seem the same without her.  Where are the gutsy, probing, really tough questions today?  The ones we all want answers to that just aren't being asked (or if asked, repeatedly go unanswered).  I watched a press conference recently where reporters stood or sat, pen and notepad ready, and to almost every question came the shrugfull response:  "We'll have to get back to you on that"; "I don't know the answer to that"; "I can't comment on that, it's classified"; "We don't know at this time", "I'm not authorized to divulge that information. ..... Next question?"

And not only at government press conferences.  Major traumatic events, such as mass shootings, or terrorist captures or attacks, or drone kills--why are the official reports so rife with inconsistencies, explanations that constantly change (inaccuracies never corrected), that strain common sense, the results of investigations kept secret, documents gone missing, inadvertently or deliberately shredded--or legislature quickly enacted to make them unavailable?

If you blow the whistle on corruption, you are not thanked; instead you yourself sometimes become a target.  If you question the lack of evidence, you are considered impertinent (or a conspiracy theorist). If you ask too many questions, you are first marginalized; then made an example of.  The result from the public is not, as one might expect, revolution, but apathy.

I imagine a future where at press conferences or daily briefings to reporters, official spokespersons will probably be dispensed with altogether.  Some underling will be designated to show up and hand out prepared printed statements, which reporters can then use to paraphrase and regurgitate into their respective 'reports'.  By that time maybe  no one will be reading newspapers or watching the news anymore, televised fictional happenings long having replaced the real news; besides, nobody could tell the difference, they've gone mad trying.  And so it goes, as Vonnegut would've said.

They go where others sometimes fear to tread
and wind up dead
(or shunned or ridiculed,
sent politely      to the back row
so as not to be so       in your face.

'Now, now, behave yourself', is what is meant.
Know your place.)

But if questions don't get asked no more --
does that mean we already   know the score?
or that it no longer
matters. 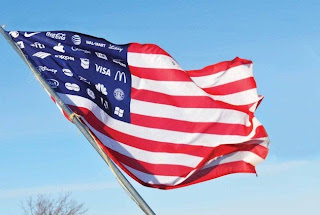 My country, 'twas of thee,
land once of liberty,
for thee I weep.
Imprison, torture, kill;
Wage wars on every hill,
Then spy, and lie, and shill.
(We are not sheep)
My country, ‘tis of thee
Please help me, help me see
Where we went wrong.
The Constitution’s dead
Our flag they want to shred
Instead of pride there's dread.
We’ve lost our song.
My country, split by thee
No more Tranquility …
So far off track!
I want some pride to flaunt,
Not hear those hates that haunt
But most of all I want
true freedom back.

*experimental improvised lyrics to the  patriotic song.  Today's supposed to be a day of celebration.  It is difficult to celebrate repeating slogans, wearing symbols, waving pieces of cloth that no longer symbolize the original intent of the forefathers.  Hot dogs and beer, ball games, parades, family picnics, fireworks--the tradition continues; our culture demands it.  But sentiments are divided.

Give me your tired, your poor,
Your huddled masses yearning to breathe free;
The wretched refuse of your teeming shore,
Send these, the homeless,
Tempest-tossed to me
I lift my lamp beside the golden door!

[Inscription on the Statue of Liberty].

America can't even take care of its own tired poor, much less its homeless, and its borders no longer welcome huddled masses yearning to be free, never mind the wretched refuse of other teeming shores.  The giant statue of a stone lady lifting a lamp remains a treasured national icon.  But things have changed. The world has changed.  We still celebrate our traditions.  Because without them, what would hold us together?

I'd rather celebrate today  those things that continue to hold us together--our shared humanness. That despite the madness and chaos and hardships, the stupidities, banality, latest political outrage, or national physical or constitutional catastrophe ... we still cherish freedom, justice, privacy, and the right to life, liberty, and the pursuit of happiness.  In absentia then, a toast -- to the America I wish it were, and perhaps some day might finally, eventually       become.