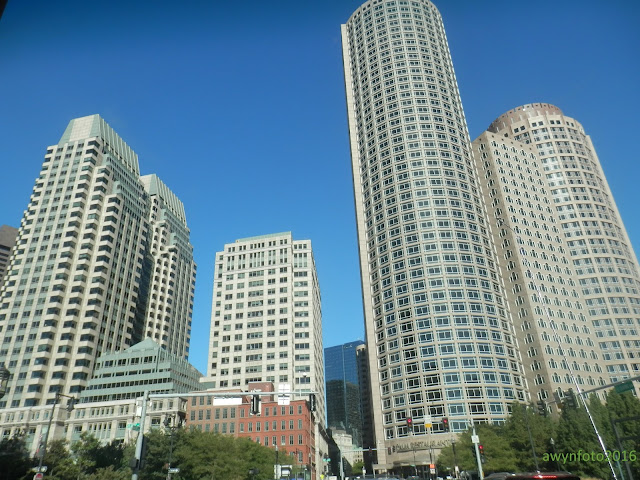 The enormity of conformity -
a thousand windows look out and
down upon.
In this sea of concrete, where additions can only stretch vertical,
the tallest trees seem midget, shrub-type accessories,
still suitable for shade
and birds.


Seasonal reminder.
A neighbor's doll  -
the child she never had


Two years ago, this same clothesline gave me the inspiration for a little poem.
The clothing here appears to be for a different doll than the one of  that earlier poem.
I have no idea if my interpretation is correct.
Lots of people, young and old, have dolls.
They display them, they attend to them, they take care of them.
Beloved objects - like a writer's pen, a painter's favorite brush
that connect to us, and us to them. 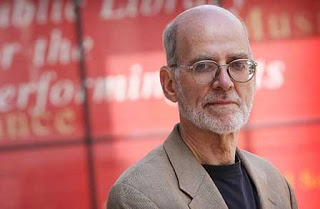 
He once graciously allowed me to share one of his poems, then signed and sent me his (then) latest book. I learned recently that he passed away on July 7th.

I liked Philip Dacey's poems.  I wish I'd shared more of them.  I wish I'd had him--or someone like him--as a poetry teacher way back when.

In his poem "Reading a Book of Poems by a Friend Newly Dead", he talks about a dead poet slipping "from the words/  into the spaces between the lines/ and then into the margins."

And lines keep revealing themselves
to be a goodbye wave, each a rehearsal
more for our sake than his. It is not
his fault that we missed the gesture.

I learned some things I never knew about  Philip Dacey before.  (He apparently quit piano lessons in grade school for the exact same reason I did--utter panic at recital time.)

In a 2014 interview where he was asked 10 questions by poet G. Emil Reutter, Dacey talked about the relevance of poetry (as well as the proliferation of poets), about poetry as "music",  and the importance of the process in producing it.

"There’s less time now to 'keep up' with new voices than to listen to old ones," he'd said two years ago.   "I wouldn’t presume to include myself in any literary lineage; I see my fate as that of compost in the vineyard where great writers have labored, a fate I’m happy to accept."

"Less time now" -- Here was a poet battling leukemia, working for as long as he was able, on his creative "To Do" list, as evidenced by the work "in Progress" items on his web page.

“My dad took the craft seriously,” said his son, Emmett. “But he didn’t take himself seriously. He wanted to emphasize the fun in poetry and imagination that drove his poetry.”

When people asked Dacey what he did, he would often reply, “Just working at the feed store.” But before he died July 7, at age 77, Dacey had taught poetry for 34 years at Southwest Minnesota State University in Marshall and authored 13 poetry books, with another coming out in the fall.

He didn't believe in writer's block, according to his son. “He said you may not like what you’re writing, but you can always write.”[source]

In a moving tribute to Dacey, his former student  Lisa Vihos wrote that he got her to think about how "creating a poem is like carving a sculpture, releasing the poem from its block of marble."  (If that were a writer's block, it means to keep chiseling).   "He also admonished me to always take criticism as a kind of  'structural stress test,' Lisa wrote.  "To look at the suggestion, weigh its merit, and make a decision based on what felt right to me, the poet."  I envy the students who had Dacey as a mentor.

Dacey likened the making of poetry to working in a vineyard, the ground from which he believed all poetry came.  I liked that his vineyard, and the poet himself, were so welcoming, not one-dimensional (as in, "Only this type of poem grown here"), offering humor as well as insight.  I like that he let the poems speak for themselves, that it was Poetry that mattered, not which vineyard it came from.

His poetry often resembled conversations one might have with oneself, accidentally overheard, in which the eavesdropper finds immediate resonance.

I am saddened to hear of his passing, more so that it has taken me so long to discover it.  To express, and accept, at life's end, that one's fate is to be "compost" in the particular vineyard in which one toils, that just having been part of the process, is its own reward, is as difficult for some as it is mind-altering and liberating for others.  Life as a process, destiny as . . .  "compost".  In an imaginary cartoon scenario I envisioned humans lining up to choose their workfield and accept (or reject) their suggested assignment: "Your job on earth is to enrich, aid with the growth of, help sustain ... [poetry]"  That's the thing about some of Dacey's influence:  it invites inquiry into meaning, tickles the imagination, encourages experimentation.

In this video from almost two years ago he recites some of his poems from memory--about working in the crucifix factory, about his brother the dancing cop, about Walt Whitman and death.  Long poems, short poems, structured, free form, "serious", whimsical -- Dacey's range of  subjects, themes, and ability to write in all forms of poetry manifested in imaginative, creative and skillfully harvested verses that illuminated, entertained, and resonated.

Rest in Peace, Philip Dacey, and thank you for your poems. Journey on.