There was a layer of snow on the ground this morning and now the sky is spitting down more of it.  Dark and cold and dreary.

George W. Bush was down in Montreal today.  The Chamber of Commerce paid him $100,000 to share the highlights of his presidency, "a period of great consequence" (you can say that again).   The talk was by invitation only, where for $400 you could sit and listen to him ruminate on his "eight momentous years in the White House and discuss the challenges facing us in the 21st century."

Some Canadians weren't too happy at Mr. Bush's visit and crowds of protesters lined up to greet him, calling for his arrest as a war criminal.  It's going to cost Canadian taxpayers over half a million dollars this year to protect His Irrelevancy from the rowdy masses.[1]  (His speech was at the Montreal hotel made famous by John "Give Peace a Chance" Lennon and Yoko Ono during those other turbulent years.)  CNN won't waste too much footage (if at all) on Bush's vociferous welcoming committee dans la rue because they've still got three or four days to stretch out the Balloon Boy story (they haven't yet interviewed the hoax family's dentist).

Speaking of peace, doesn't anyone find it the least bit ironic that President Obama, who just won the Nobel Peace Prize, backed down[2] from meeting with the Dalai Lama, another recipient of the Nobel Peace Prize, because "it might discombobulate a delicate international order."[3]  Musn't upset China.  What would we do without all that imported plastic merchandise headed for Wal-Mart or Dollarama around Halloween, Thanksgiving, and Christmas time?

As for Halloween, now fast upon us, Target and Walgreens had to pull their ads for their illegal alien costume (alien figure wearing an orange jumpsuit, holding a U.S. "green card").[4] Politics!--even the children's arena is not safe from it.

Meanwhile, my inner voice reminds me this is still "Everything About Gypsies" week here on this blog, and I've run fresh out of material.  (Truth be told, there was actually too much and I ended up taking a kazillion little side trips into the cavernous world of informationland, waylaid by exciting finds having nothing whatsoever to do with gypsies.)  But since I started the theme, I can at least post a few amateur attempts at gypsy art.

These are, in case you're wondering, designs for a gypsy headband--that cloth thing one wears around the head to hold the hair in place and out of the eyes. These headbands are created entirely out of various words for 'gypsy' in different languages.  I purposely chose non-Latin alphabets, to make it more interesting. (It was also easier, graphics wise.)

So this is the first one: a design for a headband using the word for 'gypsy in:

And--my contribution to peace in the Middle East:

Arabic and Hebrew, coexisting together.

Last night I brought home a giant pumpkin from the supermarket, for a ridiculously low price. Not to cut a face into and put out on the doorstep with a candle inside to attract the wee Halloweeners (simply leaving the light on, on the porch will suffice), but to eat it.  Not an easy job, 'peeling' this thing ('hack' is more like it), but if you scoop out the seeds and cut it into dozens of cubes or squares, bake and serve it with melted butter, it makes the most delicious meal. (Of course, part will go for pumpkin pie!)

My mate was having trouble pronouncing 'pumpkin' last night, especially the "mpk" part.  Native French speakers find English words that start with "th" difficult (he says 'bird day' for birthday; 'turd' for third, etc.) and Native English speakers find certain "el" combinations impossible to pronounce in French (I stumble over the words "oeil" (eye) and "Longueuil" (a suburb of Montreal), for instance.  (You would have to hear it in person to appreciate how tortured is my effort to pronounce these sounds correctly.  It's kind of like the Russian "L" ( л ) when followed by the soft-sign (-ль) which adds a slight 'y' sound to the L sound (hear here ). In any case, I simply can't get my tongue to cooperate so I have no right to chuckle at my husband's attempts to say pumpkin:

Found some terrific poems yesterday and hoping the authors will give me permission to share them.

I can't believe Massachusetts got snow before we did this year.  Theirs didn't stay.  Ours won't go away till next April. 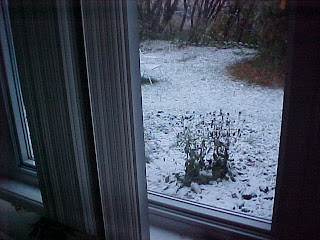